You are here: Home / Blog / 2016 / November
Labor intensive jobs are typically thought to be carried out by men.  However, these days more and more women are breaking gender stereotypes and into the manufacturing industry.  Companies are benefiting from this because it opens up a whole new group of applicants and prospects for various jobs.  Read more about women in the industry in the article below.

Realizing that women are an untapped labor pool for
manufacturers, several companies are undertaking initiatives to recruit
and develop the best female talent. 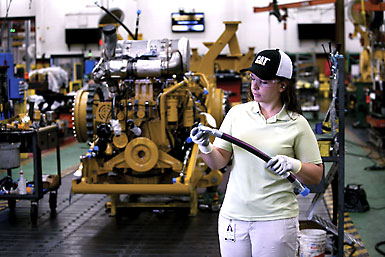 According to a Deloitte analysis of U.S. Bureau of Labor Statistics and Gallup Survey data,
over the next decade, nearly 3.5 million manufacturing jobs will likely
need to be filled and that the skills gap is expected to result in two
million of those jobs going unfilled. The Manufacturing Institute
attributes two major contributing factors to this: baby-boomer
retirements and economic expansion. In addition, the younger
generations have little awareness of the career opportunities available
in modern manufacturing and often their parents, if they have any
perception, have one that is very outdated, comments Jennifer McNelly,
Manufacturing Institute executive director.

Women can fill this gap. According to McNelly, women represent nearly 47
percent of the total labor force, but only make up 27 percent of the
manufacturing workforce. McNelly stresses that not only do women bring a
diversity of thought to the workforce, they also offer a unique
perspective as consumers. They are an untapped talent pool, she says.

McNelly attributes the lack of women entering the manufacturing
workforce to the limited awareness of the diversity of career
opportunities in modern manufacturing today. People dont realize that
modern manufacturing provides challenging, fulfilling, and well-paying
careers with opportunity for advancement, she notes. In this industry,
you arent stuck in one position. You are open to endless
opportunities, whether youre interested in design, engineering, or even
marketing and business. Todays modern manufacturing includes
application of technology, robotics, and new innovation.

Three-fourths of the Institutes respondents in its Women in Manufacturing Study
indicate that they believe that women are underrepresented within their
organizations leadership team. It also found that the proportion of
women in leadership roles in manufacturing lags behind other U.S.
industries. However, there are more than enough qualified women out
there, McNelly says. Manufacturers are now making it a priority to
recruit and develop women.

Some Initiatives
Eaton Corp. has introduced three specific initiatives to attract women
to manufacturing: its mentoring program, flexible work, and its Eaton
Resources Groups (ERGs). One of several ERGs that Eaton has formed is
called WAVE  Women Adding Value at Eaton  which has a strategic focus
on the attraction, advancement, and retention of women, according to
Cathy Medeiros, vice president of Global Inclusion & Diversity at
Eaton Corp. WAVE also is focused on providing opportunities for women
at Eaton to connect and collaborate and have a support system, she
explains.

Caterpillar Corp. has a global initiative called Women in Leadership,
which focuses on changing the representation of women at Caterpillar and
in its industry. To disrupt a traditional mindset of men only in the
heavy equipment and power generation businesses, our programs focus on
three pillars: sponsorship from the top, pipeline building in the
middle, and cultural change from the ground up, says Kelly Wojda,
Caterpillar Diversity & Talent director.

Caterpillar has a significant focus on recruiting and developing the
best female talent, using relationships with partners like the Society
of Women Engineers, as well as new avenues for reaching female talent
directly via social media. We are also encouraging more explicit role
modeling from our female leaders who hold a variety of top STEM-related
jobs at Caterpillar, Wojda says.